The U.S. Census Bureau and the U.S. Bureau of Economic Analysis indicated that, “the goods and services deficit was $54.0 billion in July, down $1.5 billion from $55.5 billion in June.”

For the period under review compared with that of 2018, there was an 8.2% increase in the goods and services deficit increased. Moreover, exports decreased $3.4 billion or 0.2%. Imports increased $24.9 billion or 1.4%. 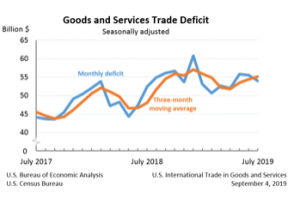 In relation to export of goods, these consists of consumer goods capital goods automotive vehicles, parts and engines which all increased by $1.5 billion, $0.8 billion and $0.6 billion, respectively. While, industrial supplies and materials decreased by $1.7 billion. Additionally, export of services decreased by $0.1 billion.

As for imports of goods; industrial supplies and materials increased $0.9 billion and capital goods  decreased $1.5 billion. However, imports of services increased by $0.1 billion.