The advance seasonally adjusted insured unemployment rate stood at 6.85% for the week ending October 3, a 0.9 percentage point decrease from the prior week’s revised rate.

Based on the unadjusted advance estimate, there were 885,885actual initial claims under state programs in the week ending October 10, an increase of 76,670 or 9.5% from the prior week. The seasonal factors had expected a rise of14,319 (or 1.8%) from the previous week. Furthermore, The seasonal factors had expected an increase of 23,144 (or 2.9 percent) from the previous week. There were 201,677 initial claims in the comparable week in 2019. In addition, for the week ending October 10, 51 states reported 372,891 initial claims for Pandemic Unemployment Assistance.

During the week ending October 3, the advance unadjusted insured unemployment rate stood at 6.6%, a 0.8 percentage point decline relative to the previous week. The advance unadjusted number for persons claiming UI benefits in state programs fell by 1,188,202 (or -11%) to 9,631,588 from a week earlier. 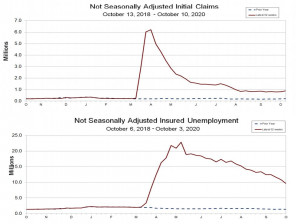