Final demand for the Producer Price Index remained unchanged in November 2019, seasonally adjusted according to U.S. Bureau of Labor Statistics. Final demand prices rose 0.4% in October and fell 0.3% in September. On an unadjusted basis, the final demand index increased 1.1% for the 12 months ended in November.

The index for final demand less foods, energy, and trade services was also unchanged in the month of November after climbing 0.1% in October. Notably, the index over the past twelve months ended November depicted an upwards trend with a 1.3% advance. 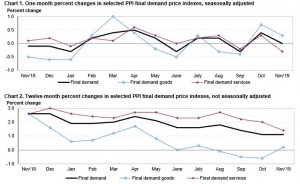