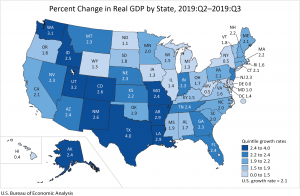 Retail trade contributed to growth in 50 states by increasing 8.2%, while Professional, Scientific, and Technical Services rose 5.6%.

For the nation, real GDP for finance and insurance  fell 5.3%. This industry subtracted from growth in all 50 states and the District of Columbia, thereby being the leading contributor to the two slowest growing states: New York and Delaware.