U.S. Real GDP in the second Quarter 2019 Increased for all 50 states 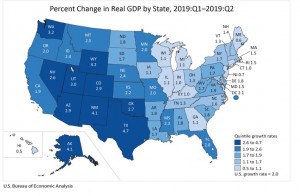 The BEA also noted that, “professional, scientific, and technical services; government; real estate and rental and leasing; and mining were the leading contributors to the increase in real GDP nationally. Mining increased 23.5 percent for the nation and was the leading contributor to the increases in Texas, Wyoming, Alaska, and New Mexico—the fastest growing states.”