The Consumer Price Index for All Urban Consumers (CPI-U) rose 0.8% for February 2022, on a seasonally adjusted basis, according to U.S. Bureau of Labour Statistics (BLS) after a 0.6% increase in January. The all-items index rose 7.9% before seasonal adjustment over the last year. It was noted, “The 12-month increase has been steadily rising and is now the largest since the period ending January 1982.”

The all-items less food and energy index climbed 0.5% in February 2022 compared to January 2022. Notably, “The shelter index was by far the biggest factor in the increase, with a broad set of indexes also contributing, including those for recreation, household furnishings and operations, motor vehicle insurance, personal care, and airline fares.” The all-items less food and energy index increased 6.4%, the largest 12-month change since the period ending August 1982.

The index shelter accounts for 40% of the all-items less food and energy monthly increase, it rose by 0.5% while the recreation index increased 0.7% in February. The index for household furnishings and operations also continued to rise month over month by 0.6%. The index for motor vehicle insurance rose 1.2% and the index for personal care rose 1.2%. Other indexes such as airline fares (+5.2%), medical care (+0.2%) and new vehicles (+0.3%). While the index for used cars and trucks declined month over month by 0.2% and a 1.5% increase in January. 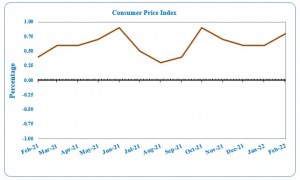