Volume Retail Trade Up By 0.3% in the Euro Area

According to the latest report published by Eurostat, the statistical office of the European Union, “In June 2018 compared with May 2018, the seasonally adjusted volume of retail trade increased by 0.3% in the euro area (EA19) and remained unchanged in the EU28.” However, in May, the retail trade volume increased by 0.3% in the euro area while in EU28, a 0.6% increase was observed.

In comparison to May 2018, the 0.3% increase in the volume of retail trade in the euro area in June 2018, is due to a 0.7% increase in “food, drinks and tobacco,” this was however offset by a 0.3% decrease in non-food products. Additionally, there was a 0.6% increase in automotive fuels.

In the EU28, the volume of retail trade however remained stable resulting from a 0.4% increase in “food, drinks and tobacco” and a 0.1% increase in automotive fuel, offset by the 0.4% decline in non-food products.

Notably, the highest increases in the total retail trade volume were registered in Germany (+1.2%), Spain and Poland (both +0.7%). However, the largest decreases were observed in Sweden and Finland (both -2.1%) as well as Estonia (-1.9%). 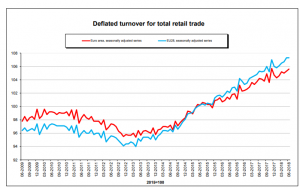