Sagicor Real Estate XFUND Limited, for the three months ended March 2019, reported total revenue of $1.78 billion relative to $3.39 billion recorded in 2018, a 48% decline year over year. XFUND mentioned that, “This is as a result of the change in the business model, with the sale of the hotels last year and lower returns from the Sigma Real Estate Portfolio. Our hotel operations segment which now comprises of DoubleTree and part of JGM, reflects this reduction.”

Operating expenses fell 45% to $1.54 billion compared to $2.77 billion in the prior corresponding period. Of this:

Hotel expenses declined to $1.21 billion, down 43% when compared to $2.13 billion in the prior corresponding period.

Share of profit from associate accounted for using the equity method amounted to $ 856.98 million relative to nil the prior year.

Furthermore, it was stated that, “Jamziv Mobay Jamaica Portfolio Limited (Jamziv), which holds the Playa shares contributed share of profit from associate of $859 million. Jewel Grande Montego Bay (JGM) recorded a profit for the first three month of 2019, contributing net income of $32 million. The property is now being managed by Playa, and has seen marked improvements in occupancy levels and average daily rental rates. In the prior year, JGM recorded a net loss of $70 million for the three month period ended March 2018. Interest and other financing costs was lower by $233 million, as cash proceeds from the sale of Hilton Rose Hall Resorts and section of Jewel Grande Montego Bay in June 2018 was used to paydown borrowings and other obligations in 2018.”

The Company noted that, “Sigma Real Estate Fund’s holdings in the “Jewel” branded hotel operations were also sold to Playa on June 2, 2018, therefore it’s primary investments now include 39.19% of Jamziv, 20% holding in JGM and ownership of several office/retail shopping buildings, industrial/warehousing properties and prime land holdings slated for development. This accounts for the lower revenues, EBITDA and net income recorded year over year.”

In addition, XFUND highlighted that, “We remain focused on the execution of the X Fund strategic plan to be the leading REIF in the Caribbean. We are seeing benefits from the 2018 reorganization of our business model and anticipate positive return on investments going forward.” 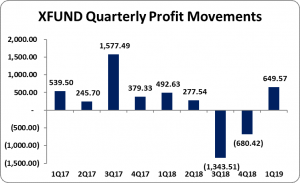