Sagicor Real Estate XFUND Limited, for the year ended December 2018, reported total revenue of $8.81 billion relative to $13.01 billion recorded in 2017, a 32% decline year over year. For the quarter, total revenue closed at $1.15 million versus $3.05 billion in the prior comparable quarter. “This was due to lower hotel revenues as a result of the sale of Hilton Rose Hall, and lower returns from the Sigma Real Estate Portfolio,” as noted by the Group. Of this:

Hotel revenue from discontinued operations amounted to $2.72 billion, a 51% decline relative to $5.60 billion reported the prior year.

Management stated that, “DoubleTree by Hilton at the Entrance to Universal Orlando, Florida (DoubleTree) net income increasing by $174 million, as they enjoyed higher year-over-year occupancy levels and average daily rates increasing by 4.3% and 5.4%, respectively. In addition, interest expense was lower by $128 million, as cash proceeds from the sale of the hotels was used to paydown borrowings and other obligations.”

Hotel expenses increased to $4.27 billion, up 15% when compared to $3.70 billion in the prior corresponding year.

Net impairment losses on financial assets closed at $2.04 billion versus $4.52 billion recorded a year earlier in 2017.

XFUND stated that, “a gain on disposal of discontinued hotel operations of $264 million. On June 2, 2018, Sagicor Real Estate X Fund and Sagicor Group Jamaica through its affiliated entities, sold the Hilton Rose Hall Resort and Spa (Hilton Rose Hall), three (3) of the Jewel hotels as well as lands that were owned by the Sigma Real Estate Portfolio (Sigma Portfolio), and a part of the Jewel Grande Montego Bay to Playa Hotels and Resort N.V. (Playa) in exchange for 20,000,000 Playa shares and US$100 million in cash.”

Furthermore, XFUND noted that, “Our newly refurbished towers and conference rooms at DoubleTree continue to attract better rates and returns for the Group. Both X Fund and Sigma Real Estate Fund continue to actively seek viable real property investments across the region to drive long-term shareholder value. We are confident that as Playa continues to expand its refurbishment program and build out new hotels, earnings will continue to grow.” 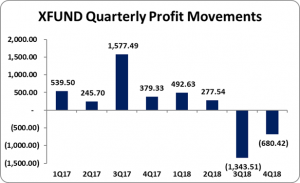