Net loss for the year end amounted to $15,000 versus net loss of $76.98 million reported in the previous comparable period.

Notably, “The performance of the hotels which were directly owned for January to May 2018 produced better results than our share of earnings from investment in Playa Hotels & Resorts N. V. (Playa) since disposal and into 2019. The prior year’s results include a onetime gain of $367 million stemming from the sale of the Jewel hotels. The current year numbers include a tax charge of $200 million on dividends repatriated from DoubleTree by Hilton (DoubleTree) to its immediate parent, X Fund Properties Limited. Unrealised capital gains from revaluation of the Jewel Grande Montego Bay (JGM) property were much higher in 2019.”

The company outlook highlighted, “The COVID-19 pandemic has negatively impacted hospitality, airlines and other related sectors. Our local hotel operation closed in March 2020, while our partner, Playa Hotels & Resorts N. V. has also closed some of its operations both locally and overseas. DoubleTree remains opened but is experiencing some cancellations. This virus is a global crisis and we continue to closely monitor the situation. We remain hopeful that our business activities will quickly rebound in the latter part of the year.” 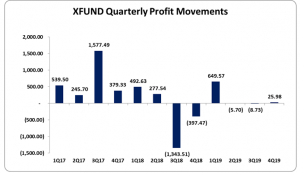