Other operating income amounted to $39.62 million for the nine months period compared to $13.30 million booked for the previous year’s corresponding period. PTL stated that, “this additional income was mainly as a result of foreign exchange gains.” For the third quarter, other operating income closed at $16.72 million (2019: $7.09 million).

Administrative expenses declined by 8% to $284.04 million, down from the $309.28 million recorded for 2019. Selling and distribution expenses fell by 6% for the nine months to close at $14.06 million (2019: $14.93 million). The Company mentioned that, “the reduction in operating expenses was driven primarily by cost containment programs and expense rationalization.” As such, operating profit amounted to $83.95 million compared to $64.61 million for the same period for the prior comparable financial year. For the quarter, operating profit went up 73% to close at $21.08 million (2019: $12.21 million).

Pre-tax profit for the period totaled $55.75 million, 8% more than the $51.49 million reported in the prior corresponding period. Taxes were charged for the period amounting to $6.97 million relative to $5.97 million in 2018. As such, net profit closed at $48.78 million, an increase of 7% (2019: $45.52 million). Management noted that, “this was mainly attributed to the reduction in operating expenses, resulting from the restructuring exercise carried out in the latter part of the prior year.” For the quarter, net profit amounted to $9.24 million (2019: $8.05 million), a 15% improvement.

PTL highlighted that, “we spent $282 million on capital expenditure as we continue to build out our manufacturing capacity. This expansion was financed, in the main, by proceeds from our preference shares issued in 2019.” 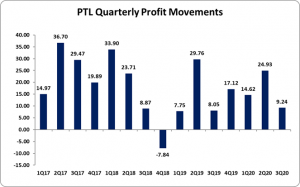