Administrative expenses saw a decline of 4%, to total $159.21 million (2017: $165.54 million). This resulted in profit from operations of $92.52 million, down 7% from the $99.36 million booked a year ago. The company outlined that, “The unfavourable variance is directly attributable to lower gross profit margins, especially in the Blue Power soap division which is as a result of our deliberate strategy to capture some of the export markets in the Caribbean while there has been an absence of competitive products.”

Other income, for the period, totaled $2.02 million, a decline when compared to the $3.31 million recorded for the same period last year. As such, profit before net finance costs and taxation totaled $94.54 million, compared to 2017’s $102.68 million. Finance costs of $13.05 million were recorded for the period, an increase of 294% when compared to $3.31 million in the year prior. Finance income totaled $8.64 million relative to the $20.1 million in the corresponding period in 2017, a 57% decline.  The company further noted: “With the improvements in the economy, the interest rates have been trending down while the exchange rate has been appreciating, resulting in very little gain from this category of income.”

BPOW stated that “the company has been performing well on an operations basis, gaining higher overall and export sales. The decline in the gross margin in the soap business is deliberate and it is hoped that once our products are accepted in the export markets, we will be able to adjust prices upwards. The stability of the exchange rate and lower interest rates are positive for the economy and will eventually produce benefits for the company.” 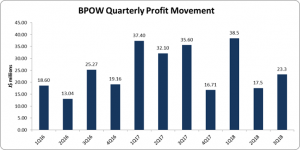