Share of net profit from joint venture accounted for using the equity method amounted to $2.87 million relative to $74,000 the year prior. 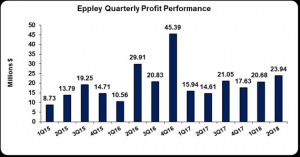