The company stated that, “Effective June 1, 2018 the Group sold the Hilton Rose Hall Resort and Spa (Hilton Rose Hall), three (3) of the Jewel hotels as well as lands that were owned by the Sigma Real Estate Portfolio (Sigma Portfolio) and a part of the Jewel Grande to Playa Hotels and Resort N.V. (Playa).”

There was deprecation of $305.55 million (2017: $137.14 million) for the period under review. Depreciation for the quarter totaled $164.99 million (2017: $73.03 million). The company mentioned that, “This was primarily driven by major renovation of our directly owned hotel- namely DoubleTree Universal in Orlando, Florida (DoubleTree) during 2016 through 2017 in keeping with the franchisors’ brand standards.”

The company highlighted that, “For 2018, we will remain focused on the execution of the strategic plan. Our newly refurbished towers and conference rooms at DoubleTree continue to attract better rates and returns for the Group. Both X Fund and Sigma Real Estate Portfolio continue to actively seek viable real property investments across the region to drive long-term shareholder value. We have also finalized the agreement with Playa involving transfer of certain tourism assets in exchange for cash and shares in Playa, and expect good long term returns thereon.” 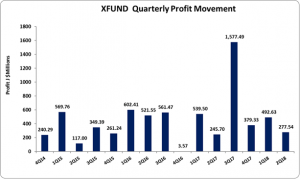