There was an underwriting loss of $116.59 million as at June 30, 2017 relative to a loss of $27.90 million. This as claims expense increased to $523.61 million for the six months ended June 30, 2018 compared to $200.25 million reported for the same period last year. According to management, “ Including in the claims expense is an actuarial adjustment of $99M. However, we remain committed to maintaining efficiency in the handling of claims by ensuring prudent reserving and settlement practices, in conjunction with strengthening of the quality of the business written.” Administrative and other expenses totaled $188.86 million for the six months, a 2% decline when compared to $192.32 million the prior year.

KEY added, “There was an overall 9% reduction in operating costs as a percentage of gross premium over the same period last year. Non-operating income increased by $8M. The management and board continue to pursue the strategy agenda of growth and increase efficiency.” 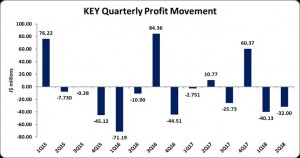