Jamaican Teas Limited (JAMT) reported a 70% increase in revenues to total $2.20 billion (2019: $1.29 billion). For the quarter, revenues amounted to $786.74 million (2019: $282.07 million). JAMT highlighted that, “The sale of 12 units at the Manor Park complex contributed $248 million to the total revenue in 2020. There were no comparable sales in the prior year. The remaining $125 million growth in sales reflects the increase in export and domestic sales in the manufacturing business. The jump in exports was mainly due to strong demand from the final consumers, particularly in the USA. The trend continues beyond the year end.”

Management mentioned, “Subsequent to the year end, overall sales increased by 47 percent in October 2020, with export sales increasing 85 percent and a 10 percent increase in domestic sales. We have good orders in hand for November and these developments, along with booking of more real estate sales and hopefully, improvement in the investment portfolio, should result in a good first quarter for the financial year 2021.” 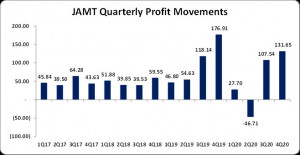