Jamaica Stock Exchange Limited (JSE) ,for the first six months ended June 30, 2018 recorded total revenue of $665.92 million, a 39% increase when compared to the $477.65 million booked the prior year’s corresponding period. For the second quarter the company reported a 34% increase in total revenue to close the quarter at $316.34 million (2017: $236.58 million). The company noted, “this can be attributed mainly to Cess Fee which increased by $43.5 million (75.3%) when compared to the corresponding quarter for 2017 due to an increase in aggregate trading value for the period under review.” JSE attributed the movement of the following areas in the six months:

o Staff Costs had a 12% increase for the period totaling $171.29 million (2017:$152.78 million). Staff Costs for the quarter increased by $7.56 million or 10% which was, “due to salaries associated with new staff hires required to support the expansion of current business.”
o Depreciation and amortization totaled $25.44 million relative to $15.28 million in 2017. For the second quarter this depreciation and amortization went up by $3.87 million (43%) due to additional assets and software which were required to support the business.”
o Professional fees amounted to $33.76 million, a 29% increase year over year.
o Property expenses climbed $11.80 million to $67.38 million during the period under review. In addition, property expenses in Q2 exceeded 2017 by $8.15 million (30%) which was, “largely associated with expenditure relating to the JSEG Business Continuity Plan.”
o Other operating expenses increased by 29% to $25.87 million from $20.09 million the previous year.
o Advertising and promotion declined from the $34.42 million booked for the 2017 six month’s results to $30.51 million.

JSE, “The second quarter performance has been favorable and the outlook for the remainder of the year is positive as it is expected there will be more listing of companies. The Group will continue in the medium to long term to pursue a strategic path of growth through the promotion of new and existing markets, new product development and the continuous improvement of service delivery to the Group’s customers and other stakeholders. ” 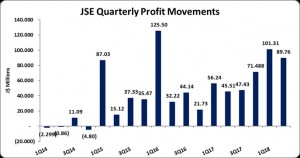