Total expenses for the six months ended April 30, 2021 amounted to $100.50 million relative to $78.53 million the same period last year. Of this, the Company reported a 29% increase in administration expenses to $100.49 million (2020: $78.13 million). “These increases are primarily attributable to staff costs (due to increase work volume), repairs and maintenance of production equipment and depreciation and amortization charges. Even with this increase, administrative expenses as a percentage of revenue remains relatively flat at 16.2% compared to 16.7% in the previous period,” as per Management. Whereas, selling and distribution expenses amounted to $15,476 (2020: $397,129) for the six months ended April 30, 2021. For the second quarter, total expenses summed to $47.33 million (2020: $37.07 million).

Net finance costs declined to $11.47 million compared to net finance cost of $244,436 million for the same period in the prior year. 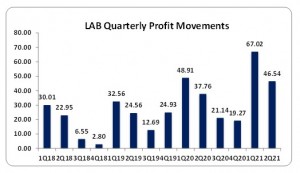