Main Event Entertainment Group Limited (MEEG) for the year ended October 31, 2019 recorded a total of $1.80 billion in revenue compared to $1.40 billion booked for the year ended October 31, 2018. Revenue for the quarter rose 31% to close the quarter at $435 million relative to $331.49 million booked for the corresponding period in 2018. Notably, the Company mentioned, “we have successfully developed attractive new opportunities that have fostered growth.  We have achieved double digit gains in all core revenue categories; and our newer service offerings have contributed $177.501 million or 10% of revenues this past year.”

Cost of sales for the year increased 35% year over year to $1.02 billion relative to $757.14 million. Gross profit for the year thus improved 21% to $776.72 million (2018: $640.12 million). Gross profit for the quarter increased 33% from $130.46 million reported for the year ended October 2018 to $173.11 million for the same period in 2019. Moreover, MEEG stated that, “due to significant increases in operating costs, the gross margins are down at the end of the fiscal year, which we attribute to increasing logistics, labour and third-party service costs.”

MEEG booked other income of $10.34 million for the financial year, 300%  higher than the prior comparable year’s $2.59 million.

Administrative and general expenses climbed 28% to $533.26 million (2018: $417.99 million). This is attributable to, “increases in automobile and fuel expenses; staff related costs; depreciation; foreign exchange losses and expected credit losses (in accordance with IFRS 9) have all had negative impacts on the bottom line,” as stated by the Company.

MEEG recorded profit before taxation of $100.71 million, a 6% rise when compared to last year’s corresponding period of $95.18 million.

The Company noted, “we recognize the importance of a lean cost structure and we have identified a need for a margin realignment project.  We have commenced a detailed review of direct costs aimed at re-assessing and refining cost management and control strategies.  We have also recognized a need to expand our portfolio of higher-value service offerings and expect the re-alignment project to have a positive impact on margins.” 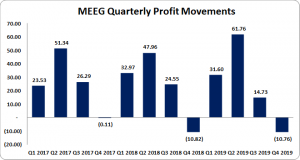